Conquistador Puzzle Trail by New Zealand Author Winston Cowie will be launched at The Kumara Box in Dargaville, New Zealand on Saturday 11 July 2015!

Drop in between 2-5pm, grab a book, get it signed, and for those that RSVP and grab a book, a showing of David Sims and Winston Cowie’s documentary ‘Mystery at Midge Bay’ will screen between 5-6pm.

Everybody has heard little tidbits about the Conquistador Puzzle whether it be about alleged caravels wrecked on Dargaville’s coast; ‘Spanish’ helmets being found and reburied on the Pouto Peninsula; oral tradition of sailors coming ashore and being massacred by Maori or Aborigines; pohutukawas on the far side of the world; or the Napier Broome Bay cannon or Mahogany ship in Australia, to name a few.

Check out the cover! 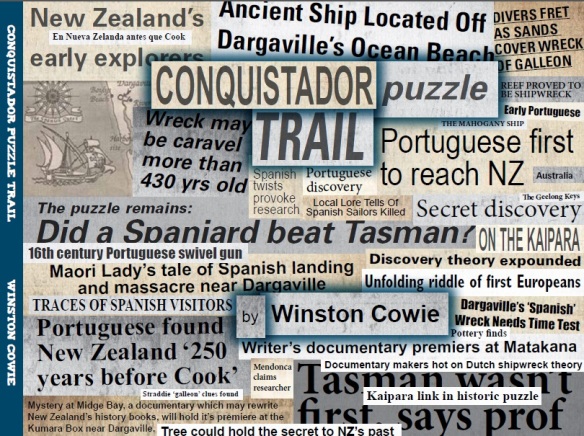 All the pieces of this perplexing puzzle, however, should at the very least lead to the reader agreeing that a different theory does exist to that of the traditional discovery paradigm of New Zealand and Australia; that being that the Spanish and / or Portuguese may have been the first Europeans to discover New Zealand. And in my view, the Portuguese, most likely and on the balance of probabilities, discovered New Zealand and Australia between 1520 and 1524. And the Spanish may have also beaten Abel Tasman between 1576-1578.

In saying that, it’s not what I think that is important, its what you, the public, thinks about the theory that is important. I’ve merely had a go at putting together the puzzle based on best available information. Have a read and form a view!

Great Article in the Dargaville and Districts News

A fantastic article on the upcoming launch of Conquistador Puzzle Trail appeared in the Dargaville and Districts News on 3 June 2015. On the trail… 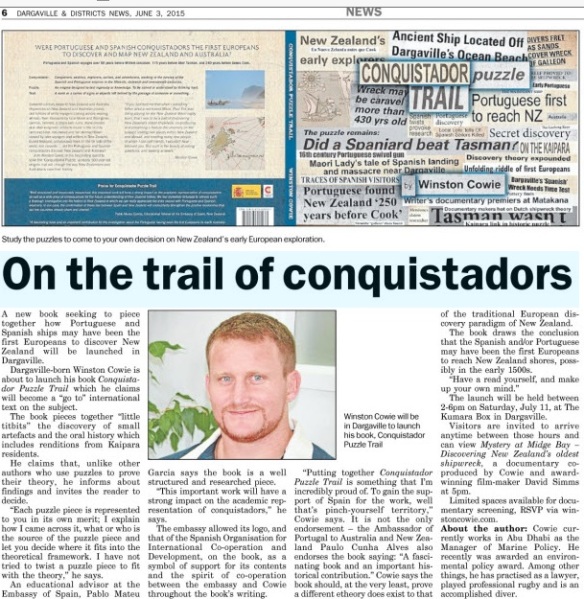 Conquistador Puzzle Trail by Winston Cowie has been praised by both Spanish and Portuguese Embassies to Australia and New Zealand.

Embassy of Spain to New Zealand

“We feel incredibly fortunate to witness such a thorough investigation into the history of New Zealand in which we can really appreciate the links shared with Portuguese and Spanish explorers. In our case, the confirmation of these ties between Spain and New Zealand will undoubtedly strengthen the positive relationship that our two countries already share and cherish.

Well-structured and impeccably researched, this important work will have a strong impact on the academic representation of conquistadores as well as a wide array of consequences for the future understanding of New Zealand history.

At the same time, we would like to acknowledge all of the time and energy devoted to the research that has gone into this investigative work. Throughout the pages, we discover new elements of New Zealand culture and history that invite us to truly believe that Mr Winston Cowie’s theory is correct.

Congratulations on the completion of this excellent work.”

Embassy of Portugal to Australia and New Zealand

“A fascinating book and an important contribution for the investigation about the Portuguese having been the first Europeans to reach Australia and New Zealand almost 500 years ago.”

Finally, this is a real community story for Dargaville, the Pouto Peninsula and Kaipara Harbour. I interviewed many elderly locals who independently had interesting stories to recount. It’s a local community story written by a bloke who was born in the area, but it also has global significance – i.e. we need to consider that another theory exists on the Australian and New Zealand discovery paradigm. Please, come down between 2 and 5pm on Saturday the 11th of July, say hello, and get involved in what will be a lovely community event.

Stay tuned for updates on what stores and online outlets Conquistador Puzzle Trail will be available in.

See you in Dargaville at The Kumara Box!